Meanshift is a clustering algorithm that assigns the datapoints to the clusters iteratively by shifting points towards the mode. The mode can be understood as the highest density of datapoints (in the region, in the context of the Meanshift). As such, it is also known as the mode-seeking algorithm. Meanshift algorithm has applications in the field of image processing and computer vision.

I wrote this article in case I forgot what Meanshift is. Hopefully I won’t. =]

The Meanshift code is available as a notebook on Github.

Here is a diagram that shows what happens step-by-step in Meanshift. 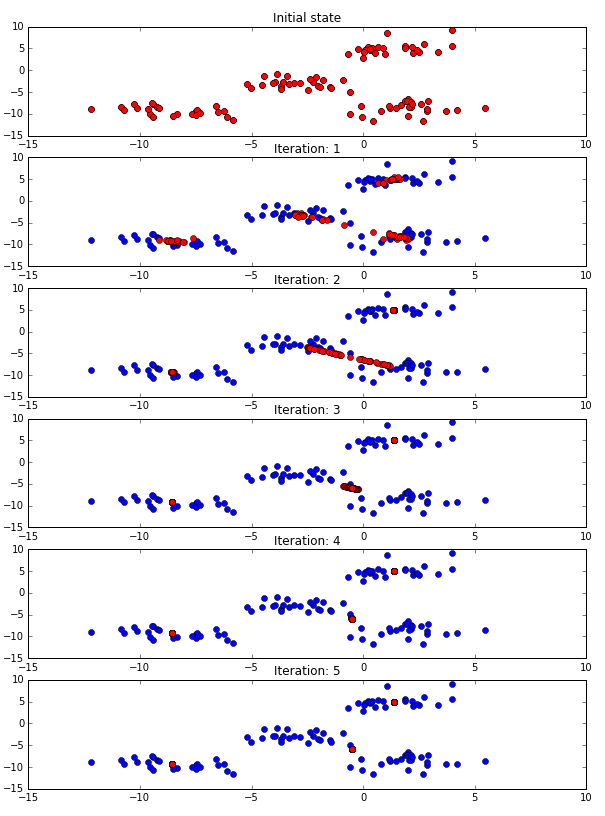 Meanshift found 3 clusters here, which I circled out above. The original data is actually generated from 4 clusters of data, but Meanshift thinks 3 can represent the set of data better, and it’s not too bad. I used Scikit-Learn’s datasets make_blobs:

Now we have a big picture of how Meanshift works overall. Let’s look into what is a single datapoint is doing, and generalize that to all points. 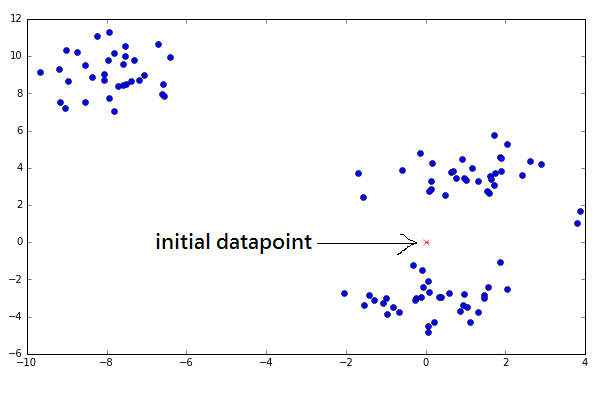 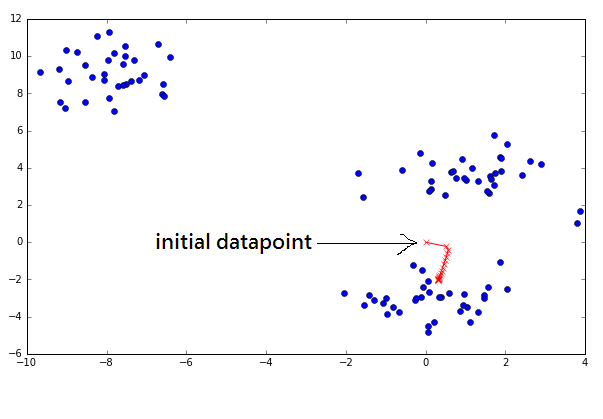 The red path shows that the point moves closer to the southern cluster center after each iteration. One may notice the movement decreases gradually after each iteration, and that is because the datapoint is closer to the centroid so the shift is less drastic. After 10 iterations, the point is really close to the centroid. The meanshift does this for all datapoints for K iterations. In most cases, 5 iterations should suffice for convergence. From this we can tell the algorithm’s runtime complexity is O(KN2), where N is the number of datapoints and K is the number of iterations of Meanshift.

Note that this implementation to demonstrate a single point moving is slightly different to where all the datapoints are moving, but the idea is basically the same. For the curious, if all the datapoints move, it will affect each neighbouring datapoints more drastically. The result is that the algorithm converges faster: ~3 iterations above versus ~10 iterations in this version.

I will have to touch lightly on the mathematics for this part. I hate math so I will try my best to explain in terms for non-math people.

You will need a few things before you start to run Meanshift on a set of datapoints X:

Now, with the above, this is the Meanshift algorithm for a set of datapoints X:

The most important piece is calculating the mean shift m(x). The formula in step 2. looks daunting but let’s break it down. Notice the red red encircled parts are essentially the same:

Let’s replace that with Wi, so the formula becomes this:

Look at the general formula for weighted average in Wikipedia gives us this:

Which is just the same thing! Essentially, the meanshift is just calculating the weighted average of the affected points w.r.t. to x. From this perspective, the formula is less mystifying, right?

To summarize: The algorithm finds a set of nearby points that affect a datapoint, then shift it towards where most of the points are, and the closest points have more influence than the further points. Repeat this for all datapoints until nothing changes.

Next, we will implement Meanshift by translating the algorithm as described above.

This code is a naive implementation of Meanshift algorithm. There are a lot of optimizations that can be done to improve this code’s speed. For instance, 1) Vectorize the implementation above, 2) Use a Ball Tree to calculate the neighbourhood points much more efficiently, etc.

The code is available on Github.

Meanshift looks very similar to K-Means, they both move the point closer to the cluster centroids. One may wonder: How is this different from K-Means? K-Means is faster in terms of runtime complexity!

Another commonly cited difference is that K-Means can only learn circle or ellipsoidal clusters. However, this is not true. The reason that Meanshift can learn arbitrary shapes is because the features are mapped to another higher dimensional feature space through the kernel. The arbitrary shapes are due to the algorithm finding circle or ellipsoidal clusters in higher dimensional feature space. When the features are mapped back to 1D/2D/3D, the resulting clusters look like strange shapes. This is also the trick as used in Support Vector Machines.

Meanshift is used as an image segmentation algorithm. Here is what Meanshift can do for us:

The idea is that similar colors are grouped to use the same color. Using a library called Scikit-Learn, this can be done very easily. The gist of the code is this:

You can find an end-to-end working code on Github in this notebook.

EFavDB has an excellent article on this topic which I highly recommend.

Meanshift is used as an object tracking algorithm. The idea is that you need to identify the target to track, and build a color histogram of this target, and then keep on sliding the tracking window to the closest match (the cluster center) to keep up with the target to track. Here is an animated gif from OpenCV that illustrates this:

You can find more details and OpenCV code demonstration here.

By now we should understand that Meanshift is a simple and versatile algorithm that finds applications in general data clustering, image processing and object tracking. It has similarities with K-Means but there are differences. Meanshift is essentially iterations of weighted average of the datapoints. Hopefully this article unravels some of the technical details that bothers you.